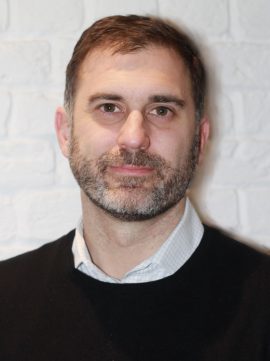 In dramatic scenes in the House of Commons on 3 September 2019, the House wrestled control of its proceedings from the Government so it could pass legislation to prevent the UK crashing out of the EU. The legislation received Royal Assent less than a week later. As the political and constitutional implications continue to reverberate, there is at least one constitutional issue thrown up by the events which has not so far been remarked upon, swamped as it has been by issues of far greater moment.  It is nonetheless worthy of comment.

As the debate in the House of Commons stretched deep into the evening, past the 9pm watershed, the Leader of the House could be seen lounging across the front bench, at times with his eyes closed, with an affected lack of concern with events unfolding around him. Tom Brake MP (LD) asked if the Leader of the House wished to be provided with a pillow to make himself more comfortable. Gavin Newlands MP (SNP) informed reporters that Mr Rees-Mogg was having, “a (u)kip on the front bench”. The Member for Brighton Pavilion, Caroline Lucas (Green) was more direct in her criticism, accusing Mr Rees-Mogg of being “contemptuous of the House and of the people”.

An image of the Leader of the House in his especially sedentary position, apparently taken from the opposition benches by Anna Turley MP (Lab), rapidly became an internet meme. Dozens of versions of the image, variously depicting Mr Rees-Mogg in ladies stockings, in a nightcap clutching a Teddy Bear wearing an “I ❤️ Boris“ T-shirt, and as an advert on a new IKEA furniture range (MÖGG), amongst many others, were soon circulating on twitter. These images were rapidly joined by others, such as Mr Rees-Mogg lying across the lap of an adjacent MP, using clips from the live Parliamentary feed. The images were reproduced on news and magazine websites shortly afterwards. Mr Rees-Mogg was even projected onto Edinburgh castle sprawled across the words “Lying Tory”. A selection of the images was reproduced in the New European, including that depicted below: 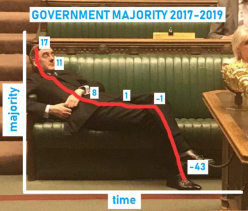 In this country, the freedom to lampoon our politicians is a cherished part of our democratic traditions and is recognised as a fundamental aspect of our freedom of speech. Parliament itself has a page on its own website praising the “distinctive and innovative” tradition of political satire in Britain and reproducing images from its own collection of Gillray, Hogarth and Doyle, amongst others.

Modern technology and the internet have enabled anyone who has some IT know-how, a sense of humour and a twitter account to participate in this fine British tradition.

What makes the Rees-Mogg affair significant is that the images that have tickled and enraged come from the debating chamber of the House itself. Because, for all that it extolls the virtues of satirical cartoons, Parliament has prevented the use of images of debates on the floor of the House of Commons or the House of Lords for satirical purposes. It has done so through austere and out-dated rules on the use of the footage of Parliamentary debates. These rules date back to the first use of television in the House of Commons in 1989 and appear to reflect concerns that the use of television images from Parliament for satirical purposes would damage the dignity of Parliament.

The rules forbid the use of copyright material from the Parliamentary feed in any “light entertainment programme” or programme of “political satire” and they state that material embedded in websites, “cannot be edited in any way”. The rules are enforced through the law of copyright (each House owns the copyright in the footage of its own proceedings) and the law of contempt of Parliament.

The issue came to the fore in 2011 when Channel 4 decided not to air an edition of the American Daily Show hosted by Jon Stewart because it included clips of proceedings in the House of Commons in which David Cameron, then Prime Minister, was robustly questioned about his relationship with Rupert Murdoch during the phone hacking scandal. The joke was not in fact on Cameron but on the deference shown to Presidents in the US. Jon Stewart teasingly extolled the robust questioning and equally robust answers of Prime Minister’s Question Time (“England is AWESOME!”). The episode remains available on the internet. Following Channel 4’s decision not to broadcast his show, Jon Stewart’s praise of UK Parliamentarians for their thick skins turned to bemusement: how can it be, he asked, that the, “people’s Parliament…the most basic expression of British democracy, is too fragile to withstand a gentle parody, a good natured kick to the clotted creams?”

The matter surfaced again in 2016 when Chris Grayling, then the Leader of the House of Commons refused a request to change the rules. At the time, Rory Bremner pointed out that the rule was unsustainable in the internet age.

Rory Bremner was right, as the Rees-Mogg episode demonstrates. The rules have long represented an unjustifiable and overly-broad restriction on freedom of expression, but they look faintly absurd today, when the internet is saturated with doctored images of Mr Rees-Mogg in various states of horizontality.

Ironically, it is European Union law that has come to the aid of British political satire. The Infosec Directive (2001/29) allowed Member States to make an exception to copyright infringement for use that constitutes “caricature, parody or pastiche”. In 2014 an exception was dutifully made to the Copyright Designs and Patents Act 1988 to this effect (s.30(A)). Whether the consequence was fully appreciated at the time or not, the amendments were made to the part of the Act which expressly applies to the Houses of Parliament and therefore provides a defence to any use of Parliamentary copyright material for the purpose of caricature, parody or pastiche, so long as the use is “fair use” as defined in copyright law. Any licence conditions to the contrary are overridden.

The provisions of the CDPA also mean that fair use of Parliamentary copyright for caricature, parody or pastiche cannot be a contempt of Parliament: Parliament has, by amendments to an Act of Parliament, authorised such use. It is doubtful whether contempt of Parliament has any role to play in this context in any event. In Demicoli v Malta (1991) 14 EHRR 47 the European Court of Human Rights found that the House of Representatives of Malta had breached Article 6 when it found the editor of a satirical periodical guilty of contempt for describing a Minister as a clown for his performance in a parliamentary debate.

Despite these developments, the Parliamentary rules remain unreformed and over-broad. Prohibiting misleading or abusive use of copyright material does not require such restrictions. Both the common law and Article 10 of the ECHR protect freedom of expression and the ability to poke fun at our elected representatives, often with implicit political criticism, is an important form of political speech.

The rules of parliamentary contempt are currently being examined by the Committee of Privileges. There are certainly contexts where the rules on contempt need to be reinforced, such as the powers of Select Committees to secure evidence (as suggested in the March report of the Committee of Privileges admonishing Dominic Cummings). But there are other contexts where these anachronistic rules need to be limited and clarified. The use of Parliamentary copyright material is one such context.

The Rees-Mogg affair draws attention to the need for Parliament to look again at its overly deferential and outdated restrictions on the use of images of proceedings in Parliament. Political satire is a cherished aspect of freedom of expression in this country. As well as often carrying a powerful political (or anti-political) message, it provides welcome light relief in tumultuous political times.

Thanks to Professors Jeff King and Gavin Phillipson for commenting on a draft.