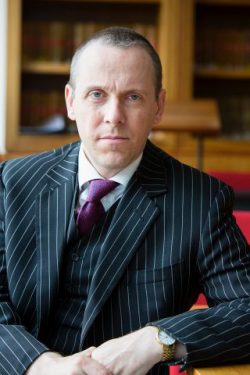 In the film ‘Gladiator’ an epic and brutal battle scene at the beginning is followed by the Emperor’s pampered and rich son arriving the next day in a coach. He jumps out brandishing his sword and shouting “where is the battle” in front of the weary troops.

Readers will remember that the original legal battle over Article 50 took place over a year ago culminating in the Supreme Court decision in Miller that was started by King, Barber and Hickman on this very blog. Many readers may be unaware, however, that a handful of later cases, mostly brought by litigants-in-person, have attempted to challenge the notification of the UK’s intention to withdraw from the EU sent by the Prime Minister in March 2017. All of these cases, to date, have been resoundingly rejected by the courts as variously ‘unarguable’, ‘nonsense’ and ‘hopeless’, not least for reasons of delay.

The most recent example is R (Webster) v Secretary of State for Exiting the EU. The core claim is that the notification was unlawful because there was no formal, identifiable legal “decision” before notification. Webster was started an incredible nine months after the allegedly unlawful notification. Furthermore, if the case were ultimately to be successful, it could cause extraordinary disruption given the delicate state of the negotiations with the EU. This formed a separate potential ground for refusing permission even if Webster had been brought promptly or in any event within three months, as the law requires.

Webster was rejected on the papers by Supperstone J as ‘unarguable’. This was followed by a long-delayed oral permission hearing that was heard by a Divisional Court comprising Gross LJ and Green J on 12 June 2018. They rejected the application in barely four pages as “Totally Without Merit” [10] and then awarded costs on the spot for Counsel for the Government (£1500). The judge put it succinctly: “Put bluntly, the debate which the claimant seeks to promote belongs firmly in the political arena, not the courts” [24].

The Webster campaign has raised, via crowd-funding, an absolutely astonishing £190,000. With such unbelievable amounts of money to burn in this litigation, permission to appeal has unsurprisingly been sought from the Court of Appeal already and, no doubt, a further attempted appeal to the Supreme Court cannot be entirely ruled out.

The Webster campaign has been marked by a considerable, and disappointing, lack of transparency. The claimant’s skeleton argument and other documentation are still not available online. This unfortunately means the thousands of hoping-against-hope, mostly ordinary, Remainer financiers cannot read the detailed arguments themselves before deciding whether to commit yet more of their hard-earned money to the campaign.

Most surprisingly, the claimant did not even seek interim relief, which one would have thought would be the bare minimum remedy if the Article 50 notification is “unlawful and ultra vires” (which the claimant must necessarily believe, as the judge pointed out [20]).

This post aims to address a minor, but hopefully interesting, point of constitutional law that was raised in Gross LJ’s judgment handed down on 20 June 2018, relating to the allocation of responsibility for dealing with foreign relations in the UK constitution. This important issue was also discussed recently by Vernon Bogdanor when he described the idea that Parliament could direct the Government’s negotiating positions as a “constitutional absurdity”. A thoughtful and careful partial dissent from that view was recently published by Alison Young on this blog.

The orthodox view is that responsibility for international treaties, negotiations and foreign affairs rests solely with the executive. This is normally exercised by the government using the royal prerogative. Miller held that the government could not use the prerogative to trigger a notification under Article 50 because, inter alia, the executive would be using a prerogative to frustrate the intention of parliament as expressed in the European Communities Act 1972 (‘ECA’) as well as other statutes [51]. The Supreme Court held that ‘a very brief’ Act of Parliament would be all that was needed to confer the necessary legal basis for the government to trigger exit from the EU [122].

The claimant in Webster focused heavily on the word “decide” in Article 50(1). The argument, in effect, was that Article 50 required a formal legal decision to be made that was identifiably separate from the notification. EU law experts may raise something of an eyebrow at this point given Article 50 does not confer any rights domestically and thus does not have direct effect. Furthermore, as Ken Armstrong has pointed out, Article 50 is “descriptive rather than normative”.

In the event, the Divisional Court refused to decide on this basis [18], even though the direct effect point was a further knock-down argument against the claimant. Instead, the focus was solely on domestic law. This was fair enough given how “totally without merit” the claimant’s arguments were without even needing to raise this point.

What are the “constitutional requirements” of UK law?

Gross LJ dealt with this issue directly. He stated that the European Union (Notification of Withdrawal) Act 2017 (“EUNoWA”) gave

authorisation to the Prime Minister to notify under Article 50(2) [and] plainly contemplated and encompassed the power to take a decision to withdraw and conferred that power expressly on the Prime Minister. [13]

Gross LJ went on to say:

The Prime Minister’s letter itself contains a decision; backed by the authority of the 2017 Act, that decision complies with the requirements of Miller. No additional UK constitutional requirements remained to be satisfied. I reject the argument that additional formality was required under the UK constitution or that there was any requirement for the Art.50(1) decision to be in some separate document from the Art.50(2) notification. [15]

Crucially for this post, Gross LJ has helpfully closed a lacuna that was arguably left slightly open in Miller. That lacuna was who is responsible for dealing with the Article 50 process. The answer, it is submitted, is the executive and specifically the Prime Minister. It has been suggested by other commentators that final responsibility rested with Parliament. This judgment puts to rest that erroneous view. As Gavin Phillipson points out, Miller was about vires. The question was whether the executive had the power to trigger Article 50 using the prerogative. When the Supreme Court said it did not, legislation was needed to authorise the executive to notify under Article 50. The power was conferred on the Prime Minister and arguably then put the previous prerogative power into abeyance to that extent. At all times, the exercise of relevant legal powers was in the hands of the executive. Webster confirms this basic fact. Parliament’s constitutional role is to confer relevant legal powers as necessary, not to step into the international realm itself.

“Aha!” say the barrack-room lawyers on Twitter, “this proves that it is the Prime Minister who made ‘the decision’ to leave the EU – and she did it unilaterally. It’s a dictatorship! That’s like Hitler!” (This is a slight paraphrase but gives a taste of the level of enlightened discourse on social media on this topic). It was indeed the Prime Minister’s job to notify under Article 50, and there is no problem with that. It is what Parliament laid down in an Act. As with everything the executive does, any exercise of legal power presupposes a prior political decision to exercise that legal power.

“The” decision or “a” decision

Interestingly, Gross LJ on two occasions specifically did not say that the Prime Minister was responsible for “the” decision to notify. Instead he said the letter was “a” decision (although he also, less helpfully, referred to “the” decision at another point). The reference to “a” decision must be the right approach, ultimately, insofar as that means a soft political decision (“a decision”) rather than a hard legal decision (“the decision”).

There is no legal requirement in UK constitutional law for a hard legal “decision” in a formal sense before notification. If there were such a formal legal requirement in the UK (as there is in other countries), then that would be well known by everyone. The government undoubtedly would have followed any such legal process before triggering Article 50. The attempt to map onto the constitution, ex post facto, the requirement for a separate formal legal “decision” is seriously mistaken. Furthermore, no one can cite any source for such a rule in domestic law and there is no EU law basis for such a rule because Article 50 does not have direct effect.

It is of course obvious that “a” decision is required before anyone does anything at all. Before proposing a Bill to have a referendum on the EU, David Cameron “decided” a referendum was necessary and Parliament “decided” to agree with him before passing the European Union Referendum Act 2015. Before notification was given to the EU, the UK “decided” to leave the EU in the referendum. Of course, none of these decisions were “legal” decisions. They were “political” decisions. In the UK constitution that may mean they are crucially important and politically binding, but they have no legal implications.

It is fair to point out that Shindler stated that:

In short, by passing the 2015 Act, Parliament decided that one of the constitutional requirements that had to be satisfied as a condition of a withdrawal from the EU was a referendum. [19]

The referendum was not legally binding, as many people seem fond of repeating. It is also true that ministers in parliament referred to the referendum as the crucial moment when the UK decided to leave the EU. Ministers also said that MPs were simply implementing “the will of the people” by passing an Act that authorised notification.

None of this amounts to anything because all these elements are purely political and, incidentally, wholly non-justiciable. All that matters in UK constitutional law is that the executive has the legal power to do what it wants to do. It is all about vires, nothing more. In this case, the government wanted to trigger the Article 50 process. EUNoWA conferred the power to do that on the Prime Minister in early 2017 and she exercised it in March 2017. No formal, hard legal “decision” was ever necessary in UK constitutional law to trigger the Article 50 process. This judgment confirms that fact.

What is definitely not needed is some extra formal documented step in parliament before the notification is valid, never mind another Act of Parliament. Even if there had been, it would be totally non-justiciable under Article 9 of the Bill of Rights 1689. Furthermore, as the judge fairly caustically pointed out, we do not know who the claimant thought should actually be taking this apparently legally mandated formal “decision”, never mind how.

“it is noteworthy that the claimant has nowhere identified the body which, on its case, should take the “decision” to withdraw, which it contends remains lacking” [17].

Worse still, this case appeared to be inviting the courts to hold that EUNoWA was some kind of contingent Act in case, one day, parliament (or someone else?) somehow happened to make a formal, legal “decision” to leave the EU and parliament then passed another Act to give effect to that “decision”. Only at this point would EUNoWA suddenly kick in and the Prime Minister would be able to start the process. Perhaps this is why five separate High Court judges and a Lord Justice of Appeal have now described the arguments put in these cases as “unarguable”, “totally without merit” and “hopeless”.

The author would like to thank Aileen McHarg, Phil Hughes, Tom Poole, Tatiana Cutts, Alison Young and Jack Williams for their helpful comments on a previous draft. The usual disclaimer applies.