There are three UK CLG events in January 2014.

On Friday 17 January  2014 the UK CLG will hold an Annual General Meeting at which proposals for developing the Group will be discussed. The AGM will be followed by a short conference consisting of two sessions. All members who have paid subscriptions for 2013 are encouraged to attend the AGM; the short conference is open to all.

Session 2 Merris Amos will present a paper on, ‘Dialogue between the UK courts and the European Court of Human Rights’. Further speakers to be confirmed. 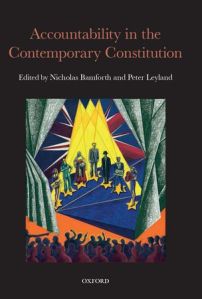 UK Constitutional Law Group members are invited to the launch of  Accountability in the Contemporary Constitution, edited by Nicholas Bamforth and Peter Leyland. The event is in association with Oxford University Press, London Metropolitan University and the Global Policy Institute. RSVP essential:  j.kingmalik@londonmet.ac.uk

The event chaired by Mr Justice Bean will include a brief introduction from the editors and feature Professor Mark Tushnet (Harvard Law School) who will speak on the subject of constitutional accountability.

Oxford University Press will be selling copies of the book on the evening at a special discounted price.