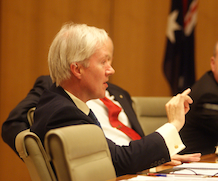 On the 17th May 2011 the Political and Constitutional Reform Committee produced a short report, ‘Parliament’s Role in Conflict Decisions’   (Eighth Report of Session 2010-12  HC 923)

The Committee concluded that there is an urgent need for greater clarity on Parliament’s role in decisions to commit British forces to armed conflict abroad.

In its report, the Committee recommends that “the Government should as a first step bring forward a draft detailed parliamentary resolution, for consultation with us among others, and for debate and decision by the end of 2011”. The Committee points out that “much work in this direction has already been completed, and the process for decision should be relatively swift”.

The report by the Committee was prompted by a surprising announcement by the Foreign Secretary during the Libyan intervention debate held in the House of Commons on the 21st of March 2011. Mr Hague stated that “We will also enshrine in law for the future the necessity of consulting Parliament on military action”.

Given the Prime Minister’s criticism of the role of the courts in human rights matters it is surprising that modifying the war powers by statute is the government’s preferred option. Presumably the government believes that it can draft a bill that will ensure that the courts do not have any role in overseeing challenges to a statutory obligation to consult.

One might think that such a clear and unambiguous statement of intent by the government must mark the end of the debate on whether and how to change the war powers. In fact the problems that the Lords Committee on the Constitution identified with trying to give Parliament a proper role without comprising executive effectiveness will not go away simply by putting the matter into an Act of Parliament.

There is only so much one can glean from Mr Hague’s one sentence as to the intended change. It may be that the war powers will not be embodied in statute. A legal ‘necessity to consult’ does not indicate whether the royal prerogative is to remain but subject to a consultation requirement or whether the prerogative itself is to be abolished and replaced by an Act. In other words will the change be minor or major? Even lesser changes will pose the Government serious problems.

There are a host of problems that the government will have to address. First, who is to be the decision maker on whether to deploy troops, is it the government or Parliament? Being consulted does not necessarily make Parliament the decision maker. Similarly, if there are too many exceptions to the requirement to consult before deployments begin then Parliament’s role will be nominal. Secondly, what is the role of the House of Lords? Politicians trot out the line that since the House of Commons is the elected chamber then only they should have a vote. That argument will not do if the Upper Chamber becomes an elected body. Thirdly, will the legal advice of the Attorney- General be made available to Parliament? The question of the lawfulness of any military action is of crucial influence on whether to approve it or not. Fourthly, what arrangements will be made for a re-approval process if the nature or scale of the operation significantly changes? Finally, after the Iraq War parliamentarians will be acutely aware that having detailed and accurate background information to any conflict will be vital to making an informed choice on how to vote. Such information obviously includes intelligence assessments. What provisions will the government make to provide such information?

I gave both written and oral evidence to the Political and Constitutional Reform Committee. In my written evidence I noted a convention embodied in a resolution will allow the House and the Government the opportunity to develop an appropriate modus operandi. I also pointed out that there is still much that needs to be changed to allow Parliament to effectively influence the policy cycle. There needs to be a re-thinking of the boundaries between the executive and the legislature, part of which should include the Government seeking input from the House at an earlier stage of policy formation.

The Committee in its Report stated “We also welcome the Foreign Secretary’s commitment to enshrine Parliament’s role in law. This is, however, likely to be a longer-term project, to be considered in depth after a parliamentary resolution has been agreed, or if this route fails to bear fruit.”

Sebastian Payne is a lecturer in law at the University of Kent.